Committed to eSET: Why we transferred just one embryo 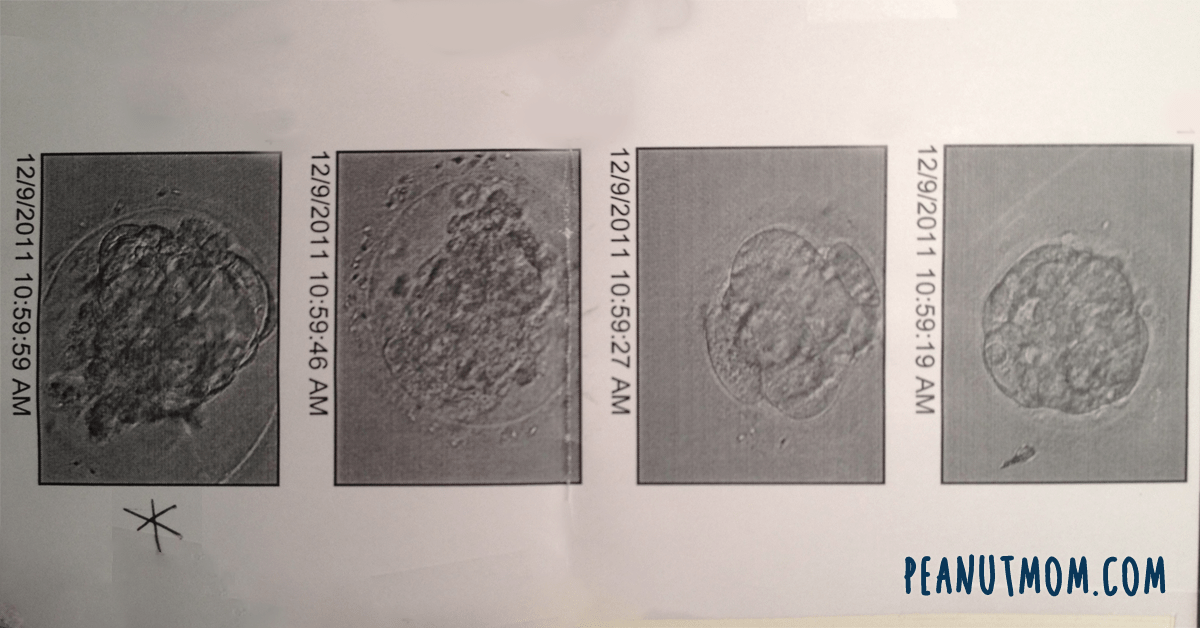 At our first pre-iVF appointment, I told the doctor that we were planning to transfer one embryo and that was it. In her visit notes, she recorded it: “Patient and her husband are committed to eSET.”

I rather liked that wording. Committed. Not resigned, or fanatical about it. Committed. A good thing.

When I talk to other iVF women, they’re a little surprised by our decision. Being committed to eSET is not as common as you’d think.

In my embryo donation Facebook group, it’s almost a given: “My recipients are doing their first transfer next month, transferring two five-day embryos!” I hear about double embryo transfers more often than singles.

It confuses me. I don’t understand why women don’t insist on eSET more often. In the interest of informing, which is kind of my thing, I thought I’d explore the reasons that Nathan and I were an eSET couple from the beginning.

(Note — I understand that this is a personal decision. Many people I know have chosen to do double embryo transfers. I’m not criticizing your decision, but I do want to inform others who haven’t yet made their decision. Many people go into iVF without enough information, and it’s my goal to help everyone be as knowledgeable about the risks as possible…before their transfer.)

Health Risks for Me

Having more than one bun in the oven automatically makes your pregnancy a high-risk pregnancy. Many conditions that endanger the life of the mother are more common in twin/multiple pregnancies. Pre-eclampsia, for one. Gestational diabetes is another, and while it doesn’t usually put the mother’s life at risk, women who develop GD are at higher risk of developing diabetes later in life — and that condition is associated with a whole host of risks, from amputation to blindness. I’ll talk more about the effect of GD on the baby in a minute.

Placental abruption is also more common with multiples1, an uncommon but very serious condition that puts both mom and babies’ lives at risk.

In addition to risks from conditions that could develop, a multiple pregnancy has a higher chance of C-section.2  If Baby A is head down, you could deliver vaginally, but you might have to have a section to deliver Baby B. And while C-sections are generally considered safe, it is major abdominal surgery, which carries inherent risk regardless of the procedure — in this case, major bleeding.

Health Risks for the Baby(s)

Some of these stats are scary, so if you are pregnant with multiples, you should stop reading. But these were some of the stats that directed our decision to do eSET. About 60% of twins are born prematurely3 — before 36 weeks. That means a NICU stay, and lots of money. (So if you’re thinking that you should transfer two embryos because you can’t afford another cycle of iVF, just think how much an extended stay in the NICU will cost. As one data point, a friend of mine had spontaneous twins who were born prematurely, and the hospital bill for each baby was a whopping $1.5 million before insurance. Even with amazing insurance, that’s a chunk of change.)

Money aside, premature birth carries risks to baby, and not just in the weeks following their birth. Respiratory issues are more common in preterm babies, as is low birth weight. Babies born before 32 weeks and weighing less than 3.3 pounds (1,500 grams) have an increased risk of developing complications as newborns. They are at increased risk for having long-term problems such as mental retardation, cerebral palsy, vision loss, and hearing loss.4

Gestational diabetes, which I mentioned in the ‘risks for mom’ category, carries risks for baby too. GD “can cause the baby to grow especially large, increasing the risk of injuries to mother and baby during vaginal birth. Babies may also have breathing and other problems during the newborn period.”8

I have some stats about the increased chances that twins are lost during pregnancy or immediately after birth, but they’re so frightening, I’m not going to post them. Suffice to say, it’s scary shit.

Many parents of multiples, out of necessity, choose not to or are unable to breastfeed. Sometimes the baby is too premature to nurse, or a NICU stay doesn’t allow mom to establish a good milk supply. Sometimes it’s simply a time thing — if you have other children, you may not have time to nurse two babies (or more!). But given the well-documented benefits of breastmilk, twins and triplets need it more than most. Nursing multiples can be done, but it’s not easy. (I know a woman who nursed triplets, and she’s my hero. I cannot imagine!)

We Would Lose Our Minds

Any parent can tell you: babies are hard, particularly the first one. The weeks after bringing home your new baby are rough for any parent. You’re not sleeping. You’re trying to figure out how to nurse (if you choose to breastfeed… do it! do it!) and so is your baby. This mewling (okay, screaming) creature is demanding all your time and attention and you have no idea what you’re doing. Poop. Pee. Spit-up. Witching hour. P.U.R.P.L.E. crying. Incessant bouncing. Non-stop feeding.

Imagine that and multiply it. Double it, or even triple it. Especially the lack of sleep part.

I know my limits. I’m not the kind of person who could just “roll with it.” The thought of newborn times two was enough to scare me into eSET all by itself.

And oh yes, forgot to mention:  BED REST.  It sounds cool, but it would drive me absolutely bonkers to be stuck in bed for weeks at a time, unable to do anything. Plus I don’t have enough time off from work to do bed rest AND a maternity leave without taking unpaid leave, which we can’t afford. Bed rest is super common with multiples, and no way was I risking that.

If it feels like twins are everywhere, you’re right. Between 1980 and 2004, the rate of multiple births increased by 70 percent.5 Celebrities in particular tend to have twins a lot (because they’re waiting until their 40s to have children, and then they need medical help to do so).

In cases of triplets or higher, many physicians will advise selective reduction. I cannot imagine how awful it must be to be faced with that decision. Especially when the alternative is something that would put all of your babies at serious risk for some major health problems they might never outgrow.

We did eSET because selective reduction was something I never wanted to experience. If we were going to have multiples, it would be the old-fashioned way, where nature decided to split an egg spontaneously. I wasn’t signing up for it.

We were lucky in that we were perfect candidates for eSET. Not everyone is.

The most recent 2009 guidelines on embryo transfer from the American Society for Reproductive Medicine (ASRM) and SART vary based on the type of embryo and the age of the mother, as well as her history and diagnosis. For a woman under age 35 who is doing her first iVF cycle, the recommendation is to transfer one embryo if it is a Day Five (blastocyst), and one to two embryos if it is a Day Three.6

In our case, we had gorgeous five-day blastocysts, and I was under age 35 for all three transfers. I make good embryos, what can I say?

But we were technically candidates to transfer two after our fresh cycle failed. So why didn’t we? Didn’t we want to increase our chances of having a baby?

Here’s the shocking twist you didn’t see coming. Hang onto your butts.

But wait, you say. The pregnancy rates are higher for a double embryo transfer!

If eSET was our best chance for a baby, committed to eSET we would be.