Is it weird to say ‘A gym changed my life’? 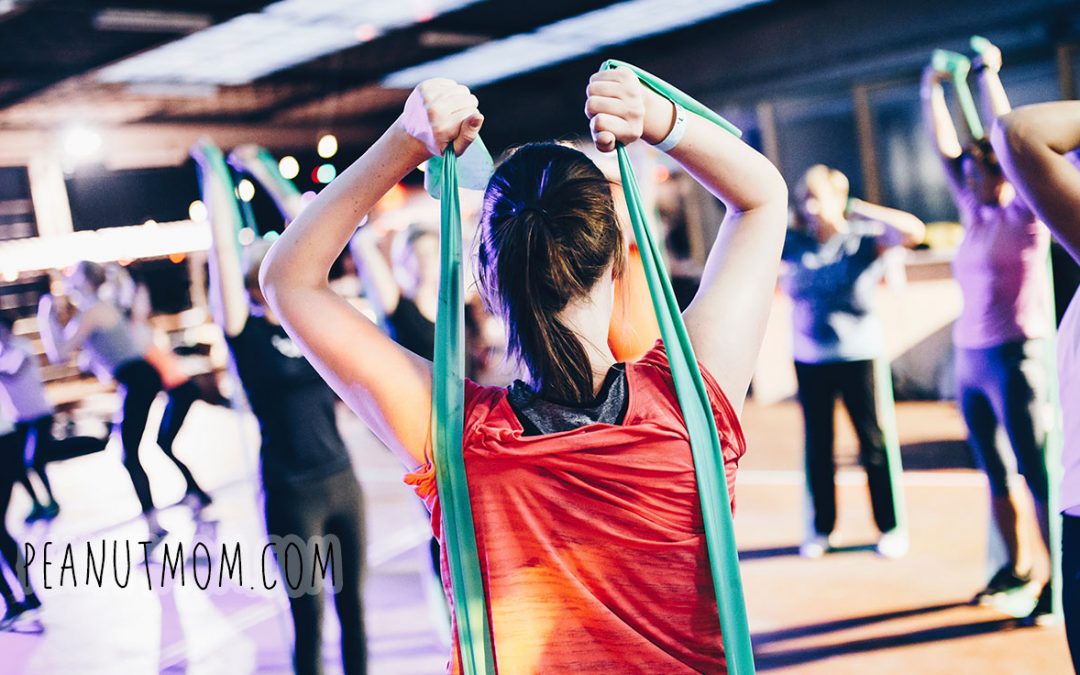 To answer my own question: Yes, it’s weird. A gym? Changed my entire life? Sounds like a bunch of multi-level marketing-style bullshit, right? Well, in my case, it’s not bullshit. Last week, I was reflecting on my happiness. In particular, how much happier I am now versus just two years ago. I joined a new gym in January of 2017, and this one decision changed everything that came after, in ways both dramatic and subtle. I would like to explain these changes. Because if you’re looking for a similar kind of change, maybe this will inspire you to go find what I found.

Rewind to 2016. My life wasn’t all that different on the outside. Same marketing job (which I really like and find very fulfilling). Same house. Same two kiddos (Squeak was then 2 years old, and just beginning to sleep through the night, thank god.) All I was doing for exercise was twice-a-week lunch-break workouts at a “bikes and treadmills” kind of place, like an Anytime Fitness. I wasn’t very good about going, and I didn’t push myself very hard. I spent every minute there with my headphones in. I talked to nobody. In an entire year, I met zero new friends.

January 2017, I joined Next Level Extreme Fitness (aka “my gym”). My headphones were pretty useless at Next Level; the workouts are group fitness-style, led by one or two instructors, for an hour every day Monday through Friday. We do two or three kickboxing days and two or three strength training days each week. The gym is organized in 8-week sessions, and at the end of my first session I was enjoying the workouts, but still felt very “separate.” As I waited for class to start every morning, I’d watch other women form pairs and trios, talking and laughing. I wanted desperately to be part of a circle, too.

For me, this is a pattern.

I’ve felt left out—separate, and outside the inner circle—as long as I can remember. It’s just part of how my brain has always worked. Whether it was reality or not, I have always felt left out and it bothered me immensely. A few weeks into my second session at Next Level, I lamented to my therapist that I hadn’t made any friends yet. I asked her what I could do to break into the existing circles. Her direction was pretty basic: “Just say good morning. To as many people as feels right. Start there.” I probably rolled my eyes on the inside, but I followed her instructions. It felt silly at first. But then, at the end of my second session, I won an award for Best Overall Transformation. Both at the event where I received the award and at the gym for weeks afterward, people came up and congratulated me. I realized something: these people knew my name. And when someone approached me, I asked their name, too. Before I knew it, I was part of a morning circle, too. Not an existing one, but a completely new one, made up of me and women who’d been standing on their own, just like I was. It felt pretty terrific.

With my physical changes (hi, muscles!) came confidence in my body. I felt strong and capable, ready to take on pretty much anything. Hoodlum in a dark alley? I’ll throw a roundhouse to your balls, dude, so don’t even try. A 50-pound bag of softener salt that needs carried downstairs? I’m on it. No sweat. 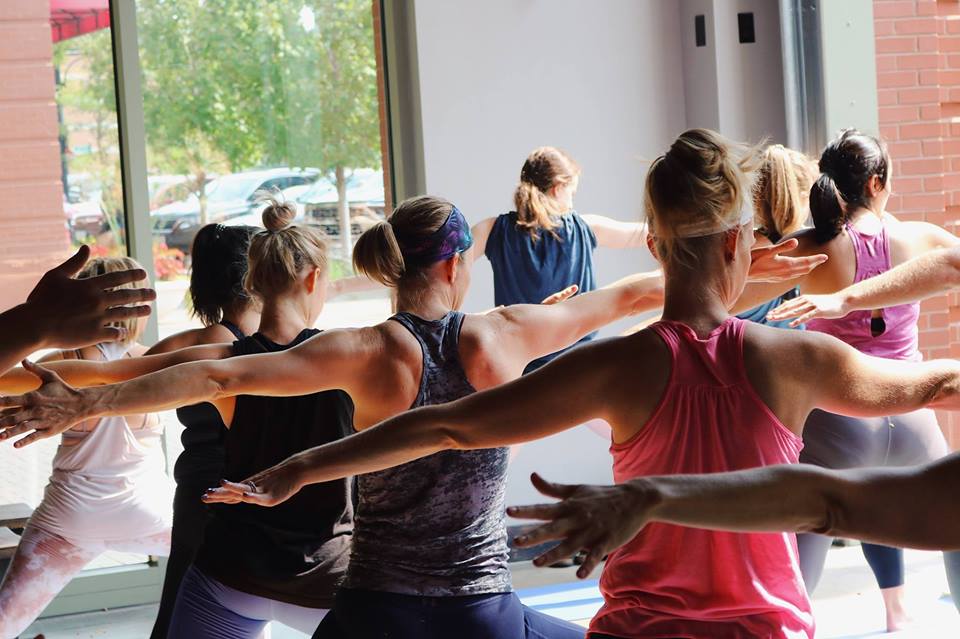 I attended a free yoga class a few weeks ago, and they had a photographer on site snapping photos. They seemed to take a liking to me (I’m in the colored headband). This picture makes me so proud. I’ve worked hard for those back muscles, and I don’t often get to see them.
Slowly, and in ways I can’t describe, that confidence began to spread. It got easier to say “Good morning” to people I didn’t know, at the gym and everywhere else. I started getting invites to activities outside the gym from a few of my gym friends. Slowly but surely, I felt like part of the group. I finally found the confidence I’d been lacking for over three decades. And with that confidence came more opportunities to connect with others. Those connections reinforced the feeling of belonging.

So how did the gym do all that?

As I think back over the past year and eight months, it’s clear what contributed to these positive changes. And not every gym is going to deliver these. Some will, but others will never come close no matter how you slice it.

1.  The exercise diminishes my depression.

I don’t need to tell you how exercise treats depression. It’s well-documented. If you suffer from depression and you aren’t exercising, you’re leaving a natural and powerful anti-depressant on the table. It’s yours for the taking. When you’re not depressed, it’s amazing what you can do. Things your depression talks you out of doing normally, like, oh I don’t know… saying good morning to people you don’t know?

2.  The structured schedule forces me to get more sleep.

One would think that getting up at 4:30am would mean you’d get less sleep. For me, that early wakeup made me more disciplined about my bedtime. I’m not perfect, but if I’m still awake at 9:30pm on a weeknight, it’s an anomaly. I shoot for 8:40pm lights out and most nights, I get pretty close. Therapists have a basic playbook of “natural” ways to combat depression. Exercise is first. Then sleep. And third is diet. On the first two, it’s “check, check.”

Because of how my gym’s classes are structured, meeting new people happens whether you like it or not. Even if you pair up with the same person every time they say “Find a partner,” there are days when they throw a curve ball and instruct, “Now find a new partner!” First order of business with a new partner: ask their name, and share your own. I made a concerted effort to remember the names I learned. (“The girl with pink shoes is Katie, pink shoes Katie, pink shoes Katie, pinkshoesKatie pinkshoesKatie…”) After a couple of sessions, I had a growing roster of names and faces I recognized. I also made an effort to use their name when I spoke to them later on. I’m a firm believer that few sounds are as sweet as one’s own name. I wanted to let these new friends know that I made the effort to commit their name to memory. It’s a little thing, but something I appreciate when someone does it for me. If you join a gym with no group fitness component—like a 24-hour Fitness, where everyone has their headphones in and doesn’t interact except to say “Are you done with the 35-pound weights?”—you won’t find this. Go find some group fitness classes, or something like it. If you tour a gym and see everyone wearing headphones, run the other direction.

4.  The physical changes gave me confidence.

I didn’t hate my body before I joined the gym. I’d say I more just tolerated it. It got me where I needed to go, but parts of it were kind of embarrassing (arms especially). After joining the gym, I wasn’t just tolerant of my body, I was downright proud of it. I was also thankful for it, because it works how it’s supposed to (except for a gastrointestinal autoimmune disease, but that’s not really related to muscles). That pride is a great feeling.

5.  The community I’m part of helps me belong.

The gym has a Facebook group that’s just for members. It’s nice to have a space where I can ask questions or lament my sore muscles with a group of people who get it. We also have an end-of-session party every 10 weeks or so, where we can let our hair down (literally) and have a few drinks. Those parties are always so much fun. Plus there are cupcakes. The owners of our gym do a great job of creating a community that’s supportive and not snarky or snooty. Sure, there are some bad apples among the several hundred members, but they are more than drowned out by the good eggs. We support each other, inside and outside the gym. Case in point: My husband does an annual comedy show for charity. We choose an organization to give the money to and then hope to god people show up. The benefactor this year was the Iowa Donor Network, an organization I connected with because of (surprise!) a friend I met at the gym. When the night of the show arrived, a nice group of “gym people” were there to support the cause.

6. My confidence expanded far beyond strength.

Just yesterday, I met with my therapist and shared with her my revelation that the gym was the impetus for a lot of positive change in my life. “Not just in your life, but in you,” she pointed out. “Your depression was running the show. You cared a lot about what people thought of everything. You’ve grown so much in just a short time. It’s been really fun to watch.” She’s right. It’s a misnomer to say that ‘my life has changed so much.’ It’s not my life so much. It’s me.         ———- Photo by Geert Pieters on Unsplash
← Previous Post: Why laser hair removal is the best thing ever Next Post: How to stop your kid's thumbsucking. →