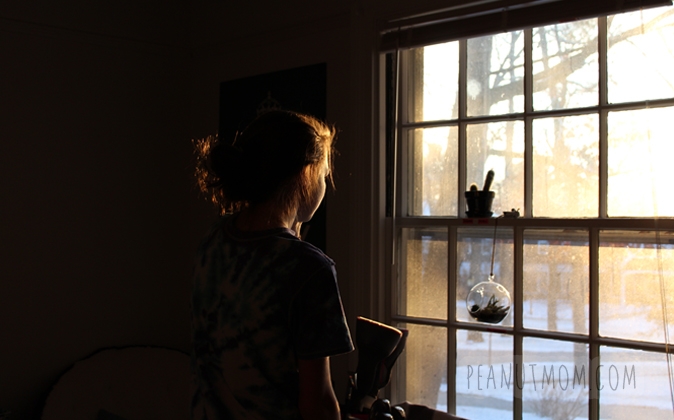 Okay, you guys. I need to write about something. I’ve been thinking about it for a while, but couldn’t screw up the nerve. I’m nervous to put too much of myself out there. I’m worried you’ll think I’m weak, incompetent, and a bad mother.

Much more likely than that, however, is the possibility that someone—maybe you?—will read this and see yourself. And maybe I’ll have the opportunity to help someone who’s in my same shoes.

I’m going to talk about my depression. Judgment be damned.

I control my brain. Right?

Depression is a funny thing. It’s one of the few diseases our society believes we can “think” ourselves out of.

What causes this delusion to be shared so widely? Well, my theory is this: it’s 2018, and the brain remains a mystery. We still don’t fully understand how it works, why it works, how yours is different from mine, and more importantly, why it doesn’t work.

We understand other parts of our body so much better. Like the pancreas. We know what happens deep inside its tissues when Type I diabetes emerges. So we’d never dream of asking a diabetic to just “think” themselves well. We understand the root of the problem.

But the brain? It’s an enigma.

While we remain leagues away from understanding the brain, at the same time, there’s no bodily organ we’re more intimately familiar with.

To a degree, you can exert some control over your brain. There are things you can do to help your brain operate how it should. And these things make a real, tangible impact on conditions like depression and anxiety.

Case in point: exercise. When I started working out regularly last January, I noticed that I was having a lot fewer “down” days. My lows weren’t as low. I raised my brain’s base level of serotonin (or maybe dopamine, we really don’t know) by exercising, and I could tell it was making a big difference.

Yes, we can exert some control over our brains, but we cannot assume that the shadowy corners of our brain will bend to our will as well.

Yet, for some reason, that’s what we humans erroneously believe—that our control over the brain is absolute. We swallow hook, line, and sinker the fallacy that because exercise can improve your mood, and meditation can reduce anxiety, you can simply “think” your way out of depression or anxiety…if you just try hard enough.

Of course, we’re dead wrong. But it doesn’t stop people from trying.

So there I was, in early January. It was cold—bone-chillingly cold, with high temperatures reaching only the single digits. My nine-year-old schnauzer, Kitty, had just been diagnosed with diabetes mellitus and needed twice-daily injections. As his pancreas was failing, so too was my brain. I just didn’t know it yet.

The change didn’t happen quickly. Sadness crept in, little by little, slow and steady so as to remain unnoticed as it slipped through the door. Getting out of bed was difficult, and I was angry all the time. I felt like my friends were pulling away from me. I imagined slights, and convinced myself that they didn’t want to be my friend. I was irritable at home, yelly with my kids. Anxiety threatened to overcome me simply because the living room floor was littered with a rainbow of Legos.

It came to a head on a Monday. I spent the entire morning trying not to burst into tears at my desk. Worse yet, I couldn’t articulate a single reason why I was upset. My depression, normally quiet and snoozing in its hibernation cave, was out in full force.

I immediately called on my mental list of “What to do when your depression rears its ugly head.” This list has served me well during depressive episodes for 18 years.

Shit. I’m already doing this. I work out six days a week, for an hour each day. Hard. It would be stupid to go beyond that. It’s difficult to work out at 5:00am when your brain is telling you to stay in bed, but I know that exercise is another form of medication for my depression. So I drag myself up and out of bed, and I go. Every day but Sunday.

Shit again. I get up at 4:40am Monday through Friday, and I am in bed, lights out, by 9:00pm. On weekends, I sleep in until just 7:00am. Any later and I’ll struggle to get to bed on Sunday night, starting the week on a sleep deficit. I’m doing everything right in this area already. Damn.

There are occasional weeks when I drink more booze, but most of the time, I indulge in one to two drinks per week. I can cut it back to zero, but I have a hard time believing that it will make a big impact.

I’ve always found strength in telling the people closest to me when I’m having an episode. My friends, my immediate coworkers (that one is hard)… I don’t expect sympathy, but when I’m not myself, the people who know me best can help remind me who I want to be.

Okay, I’m doing all of that. What next?

After telling my friends what I was going through, I was out of options. There was nothing left on the list. I couldn’t fix this on my own.

At my regular therapy appointment, I described what was happening.

“Have you considered increasing your medication?” she asked.

I was stunned, and a little put off. That’s your first suggestion?!

She went on to explain that when clients come in with a depressive episode, she suggests exercise, more sleep, less drinking, more mindfulness. But she knows I’m already doing those things (except the mindfulness, which I suck at). Beyond that, the best way to nip this in the bud was a temporary boost in my medication dose.

I was skeptical, and I think she could see it on my face.

“You’ve been on the same medication for thirteen years, Lydia. Most people aren’t that lucky. An increase in your dose isn’t a sign of weakness. Your brain changes over time. What worked before isn’t working now. And you can always go back down when the weather turns warm,” she explained.

She shrugged and suggested either a trip to someplace warm or a Happy Lamp.

I was eager to try either one—or both. This is Iowa, and we’ve had a snowy and cold winter. It’s sucked, actually, and I am sick to death of being trapped inside. Especially on weekends with my kids, when Nathan is traveling for work.

I searched for flights to see my mother in southern California, or my sister in Florida. I couldn’t make it work, between Nathan’s travel schedule and a handful of other commitments I couldn’t miss (like Squeak’s surgery for a new set of tubes). Damn—Happy Lamp it would be.

It’s leaning toward late February now. I’m still fighting this funk. I bought the Happy Lamp earlier this week and have been dutifully sitting in front of it for 30 to 60 minutes every day. I don’t expect an instant feeling of happiness, but I’m hoping that the lamp will start a slow build back to my normal.

If not, I’m waving my white flag of surrender. I’ll accept the reality that I have a disease, and my brain is not working correctly. I’ll boost my antidepressant until the spell passes.

This is the second year in a row I’ve experienced a January/February depressive episode. Next year, I’m not going to let it take hold. I’ll go in fully prepared.

I’m already planning to book a trip to someplace warm, but I’ll buy my tickets in November, when they’re cheap. More than one warm trip, if I can swing it. I may even boost my dose proactively in anticipation.

If this is going to happen every year, I’m going to come out swinging as soon as the calendar flips. And maybe next February, I’ll have more fun than funk.

← Previous Post: 9 Reasons Alexa is Awesome Next Post: Why laser hair removal is the best thing ever →