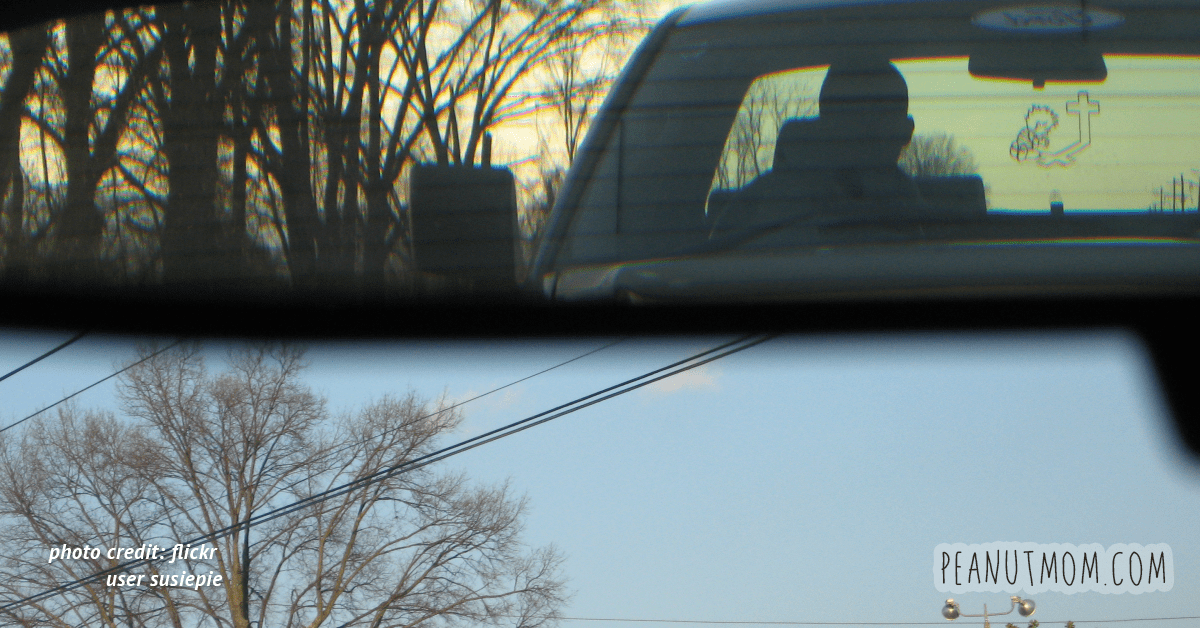 The definition of “traffic” in Iowa is a bit different from the rest of the world. But last Tuesday afternoon, I found myself moving forward at a crawl, approaching a four-way stop (apparently along with every other car in the city), feeling annoyed. My drive from daycare back to home is a short trip through a residential neighborhood… one typically with no traffic. But not today.

A few cars in front of me, a small SUV suddenly jumped out of line and pulled into a driveway. A mother climbed out of the driver’s seat and opened the back driver’s side door. She leaned in, looking stressed and angry, and lifted out a screaming toddler, no more than three years old.

She removed the little girl’s sweatshirt, and the kid let the world hear her displeasure. Her mouth was open with a full-volume wail, and I watched the little girl stomp her feet and point at the ground.

The mother looked frazzled as she tried to handle her upset progeny. She wiped at the girl’s pants, apparently dirty with whatever the child was eating in the car before her mother removed her from the carseat.

A moment later, the mother scooped up the screaming toddler and carried her around the front of the vehicle to the passenger’s side. She looked around furtively and for a moment, made eye contact with me, as I was passing only a few feet behind her parked car. Then I watched in horror as she placed the little girl in the front passenger seat of the SUV.

I wished a cop was nearby. As if a tantrum is an excuse for shirking the law. What a moron. So dangerous.

I yelled at the lazy mom through my closed passenger window. She saw my arms flying and looked at me again. Her face remained blank, and then I saw a flash of anger. The mom walked back around to the driver’s side and climbed in.

I had passed her by this point, and watched the rest in my rearview as she aggressively backed into traffic, horning in on a sedan without patience. I shook my head. What is the world coming to?

Last Tuesday afternoon, I picked Peanut up from daycare as usual. Her teacher was at the front desk as I walked in. “Peanut didn’t have a very good afternoon,” she told me. “She was just off, and very emotional, and she didn’t like that I was sharing my hugs with the other kids.”

“Toddlers, what can you do, right?” I asked the teacher with a laugh. I walked back to the playground and spotted Peanut in a little plastic car, looking forlorn. She made a beeline for me and leapt into my arms.

When she was buckled into her carseat, I pulled out of the daycare and asked about her day, trying to get at the reason for her sadness. “Do you have an owie?” I asked. She nodded. “Where is your owie, sweetie?”

In the rearview mirror, I watched her point to her mouth. I furrowed my brow… sore throat, maybe? Did she fall and bite her tongue, or get a fat lip? As I asked her each of these questions, she shook her head no. I pulled up to a long line of cars inching toward the four-way stop, just a half-mile from home. How frustrating. Construction nearby had been making the line at the four-way stop much longer than normal lately.

“It’s okay, sweetie, when we get home we’ll take a look and see what the owie is from,” I reassured her. She nodded, her thumb loosely in her mouth as she looked at me in the mirror. I turned my attention back to the cars in front of me.

Suddenly, I heard a noise, and watched in horror as Peanut’s mouth opened and a wave of vomit poured down her front. A moment later, another one. Shit shit shit. What should I do, what should I do?!

A moment’s reprieve and she vomited again, and I decided to get her out of the seat before it got worse. I pulled quickly into the nearest driveway and threw it in park, dashing back to her door.

She was crying, and I carefully unbuckled her, vowing to douse myself in hand sanitizer later. I lifted her onto the driveway and immediately removed her sweatshirt, which had gotten the worst of the impact (next to the carseat). She pointed to her pants, which held more of her stomach contents.

“Mommy, I need a dry!” she sobbed, using her word for napkin.

My heart broke for her. It was Peanut’s first bout of the stomach flu. She had no idea what was happening to her.

I grabbed a diaper from the emergency stash in the backseat. It was all I had to clean her with. “Baby, baby, it’s okay, Mommy is going to get you cleaned up,” I reassured her, trying not to panic. “We’re almost home, we’re almost home.”

I called it passable and looked in at the carseat. Absolute carnage. Covered in drippy orange goop (Cheez-its for snack that day? Yes, Cheez-its). I made an executive decision and scooped her up, carrying her around to the front passenger seat.

If she vomited again, she’d hit either the leather seat or the WeatherTech floormat. I half-considered putting her in Squeak’s empty carseat, but didn’t want to deep clean both. Plus we had just a half-mile to go. Home was so close.

As I placed her in the car, I saw movement out of the corner of my eye. A woman was glaring at me from the driver’s seat of her van. She threw up her arms as if to say, “What the hell are you doing?!”

I had a momentary flash of anger as I thought about the carnage in the back seat. Yeah, lady, you come over here and look at that carseat, and then you judge me for my parenting decisions. F**k you and the horse you rode in on.

I buckled the still-crying Peanut into her seat and ran back to the driver’s side, backing out as quickly as I could manage. Luckily a nice driver let me into the line of cars immediately, and I drove home carefully… and slowly.

Pulling into the driveway, I called for my husband, who was in the living room with Squeak. I carried Peanut in and asked him to put her in clean clothes and wash her face and hands.

“She threw up?” he asked. “Well, that makes sense, because I’ve been sitting here for the last hour feeling queasy and wondering if it was my imagination.”

Forty-five minutes later, he was bent over the toilet. I banished him to the basement for the night as I tended to Peanut, who vomited several more times before finally collapsing from exhaustion at 7pm, weak from sickness.

You’ve probably figured out that the first story was my assumption of what went through the head of the Woman in the Van. The second story was what actually happened.

Was putting Peanut up front a safe decision? Nope. Lawful. Negative, Ghost Rider. But you do what you gotta do sometimes. And this was one of those moments. I threw on my Super Mom cape and dammit, I got my baby home where she needed to be.

The moral of this story? Don’t judge. In any given situation, what you think you see may not be remotely complete. You’re probably only seeing the tip of a very big iceberg. In my case, the tip of a very large, Cheez-it covered iceberg. Blech.

Remember that next time you see something that looks like negligent parenting. I know I will.

P.S. — I didn’t escape Peanut’s virus. At 3:30am I woke up queasy too, but having it hit you when your stomach is empty in the wee hours is about as good as you could wish for. We all spent a day recovering and Peanut was good as new by Thursday. Squeak stayed healthy as a horse, thanks to the wonders of breastmilk and antibodies!

P.P.S. — I can’t say enough wonderful things about my Britax Advocate carseat, which allows every piece of fabric on the seat, including the straps, to be removed and washed. I still used an entire canister of Clorox wipes on the frame. And I will never allow Cheez-its in my house. Ever.