Why I loved giving birth 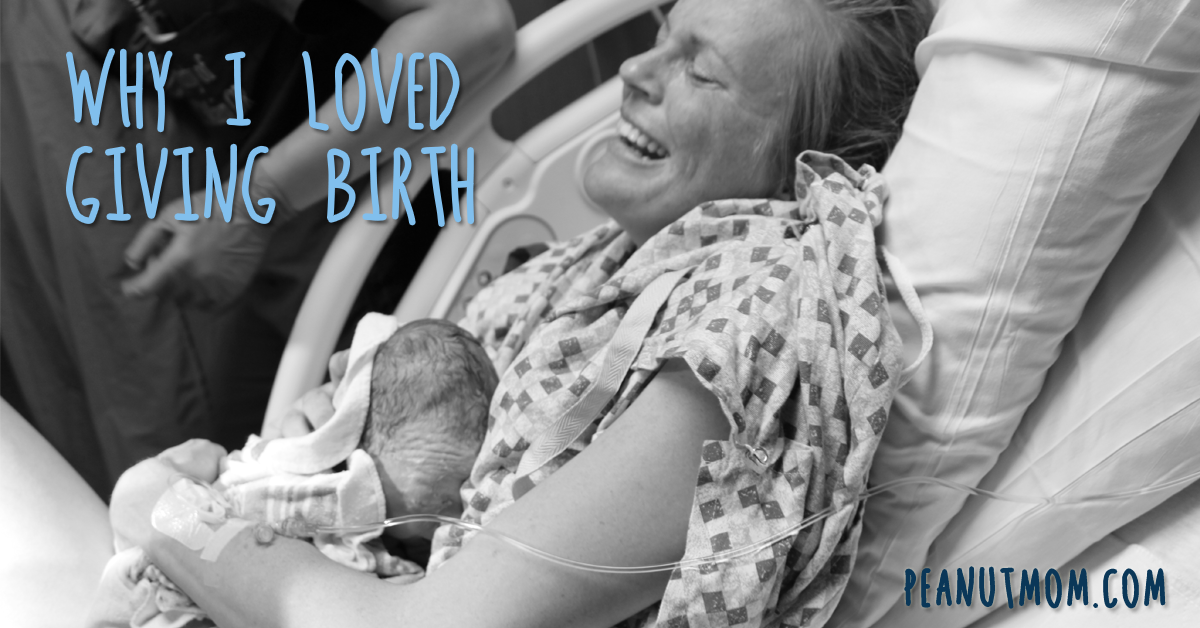 I’ve come to the realization that I’m a bit of a freak of nature. At least when it comes to giving birth.

Many of you know this already, but for the noobs, some background: my first delivery was painless all the way up to 8 centimeters. I had light cramp-like contractions for an hour, followed by an hour and 20 minutes of “holy shit that hurts” painful contractions. They only got bad just as I hit 10cm and by then, I was able to start pushing. Fifty-nine minutes later, Peanut was here.

When I thought back on my delivery experience, while it wasn’t completely pain-free, it was pretty easy. No epidural, which was one of my goals going in (I kept that quiet, and I’m not even sure I admitted it to myself… I was so worried about being disappointed if things went awry, or being down on myself if I didn’t stick to my plan).

Squeak’s birth was even faster. Contractions started around 6pm, were super faint for the first two hours, and even after they started to smart around 8pm, they weren’t awful. The “holy shit” part came around 9pm, and by the time I caved and asked for the epidural, I was dilated 10cm and it was time to push. Eight minutes later: Baby.

What did I do to have these relatively easy births? Not a damn thing. I didn’t do kegels like crazy or pregnancy yoga. I just have good genes. My mom always said she’d rather have a baby than go to the dentist. Apparently I inherited her birthing chops. (And thus far I’m the only one who did, among me and my 2 sisters who’ve given birth. Sorry, girls!)

A few weeks after Squeak’s birth, I was out to lunch with friends, when one asked if the old adage was true: you forget about the pain of childbirth and look back on the experience fondly. I nodded vigorously – “Absolutely true,” I responded.

Another woman at the table, just a few months into motherhood, looked at me like I had sprouted a horn out of my forehead. “Um, no. Not true. It was awful and it hurt really badly,” she explained. “I don’t think I’ll ever do it again.”

I admit that my experience is a little unique. My births were relatively fast by typical standards. It was this speed that meant a lack of epidural both times, and that meant I felt it all. Really felt it. As crazy as it sounds, that intense pain is what made the experience so… well, for lack of a better word, moving.

As soon as Peanut was out, I fell back on the delivery bed and sobbed. Really sobbed. But it was happy sobbing. I can’t remember a single other time in my life when I sobbed out of pure, unadulterated happiness.

Oh wait, yes I can. When Squeak was born. Yup. Same incredible feeling.

The wave of euphoria I experienced after delivering my babies, after all that work and sweat and tears, was… my god, I can’t even do it justice with words. It was indescribable. Laboring and delivering was hard. In particular with Peanut, I thought I couldn’t do it. I even said it, mid-contraction, many times: “I can’t do this!” (Actually, I think I shouted it.) But you know what? I could do it. And it felt awesome.

If you’ve never felt a contraction, you probably imagine it to be something that puts you into snarling-monster-human mode. Sure, the bad ones do… but only for a little bit. The great thing about contractions is that you get breaks between them, during which you feel pretty normal. Each contraction builds, peaks, and subsides like a wave, making the buildup and fade out fairly tolerable. If labor was constant pain at the peak level, no one would be able to sanely endure it. Pain comes in shifts, and that makes it a little easier on us.

That said, when the pain is in full force at the peak of a contraction, you can’t even think. Your brain is so focused on the pain that you can’t answer questions or hear people when they talk to you. You cannot muster the brain function to speak. Imagine that, if you can. I had never had an experience quite like it before. My entire body was focused; all resources were directed toward getting baby out.

Speaking of getting babies out, pushing a baby out is damn hard work. You’re asking your abdominal muscles, who’ve been relegated to the role of “3rd string quarterback” for quite a while, to come off the bench and play like Tom Brady. I’ve talked to women who are aerobics instructors and power lifters, no strangers to pushing their body to its limit, and they agree — it is the hardest thing they ever did.

Contrary to what they show on TV, the contractions don’t stop when you start pushing. The pain is slightly less because pushing through a contraction feels good (well, relatively good). In a way it’s almost worse, because by then, contractions are right on top of each other. No relief.

My deliveries charged forward like a hood ornament on a freight train, with the pain of back-to-back contractions motivating me (now that’s incentive). Next, add in the pain of baby crowning. I won’t get too graphic, but flesh is not steel – when pushed beyond its limits, it tears. OWIE.

I am no doctor, but if I were to guess, I’d say that enduring the searing pain of contractions and then the burning pain of a crowning skull pushed my endorphin levels to the ceiling. The pain and sheer effort combined to make the end so sweet.

For me, no other experience can compare to giving birth. You think you can’t do it, you’re just positive you can’t go on, and then you do. You friggin’ dominate that delivery. And there’s nothing sweeter than thinking you can’t do something and discovering that yes, indeed, you most certainly can. Dripping sweat, muscles shaking from exertion, the downright primal nature of it all… it’s empowering. At least it was for me.

I loved it. I really did. Every single painful second of it (though I wouldn’t have said so at the time, because I was in pain and because I couldn’t speak anyway, ha!). Looking back, I think giving birth was honestly the most amazing thing I will ever do, and I’m so lucky I got to do it. A massive physical challenge coupled with some of the most intense and overwhelming emotions I will ever feel. Nothing else can top it.

(Maybe heroin. But I’m not going to test the theory.)

I am incredibly sad I won’t get to give birth ever again. If I could avoid the whole ‘being pregnant’ part, and the ‘paying for college’ part, I’d have babies all the time.

I wish every woman could experience birth the way I did. I loved it so much that I want everyone to feel what I felt — that feeling of immense power, like I could conquer the world. The oh-so-rare tidal wave of euphoria, bringing happy sobbing in its wake. Because what else in life can deliver something so rich? 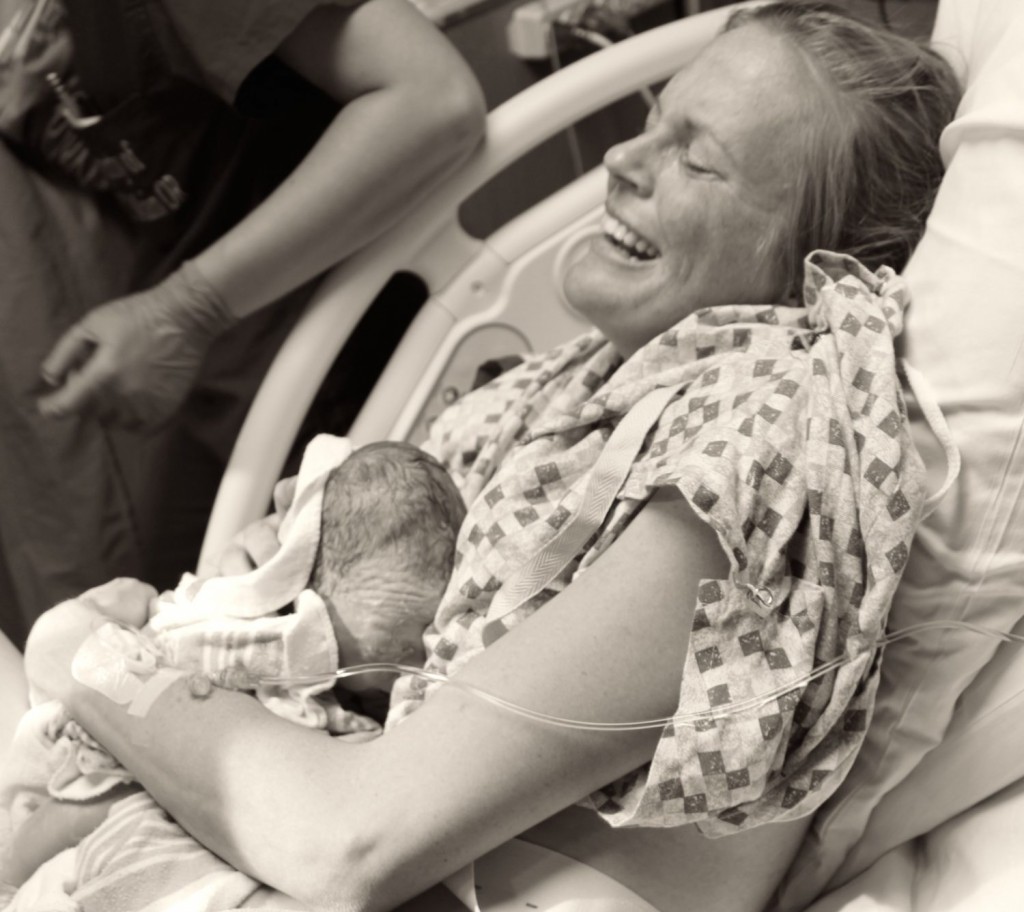