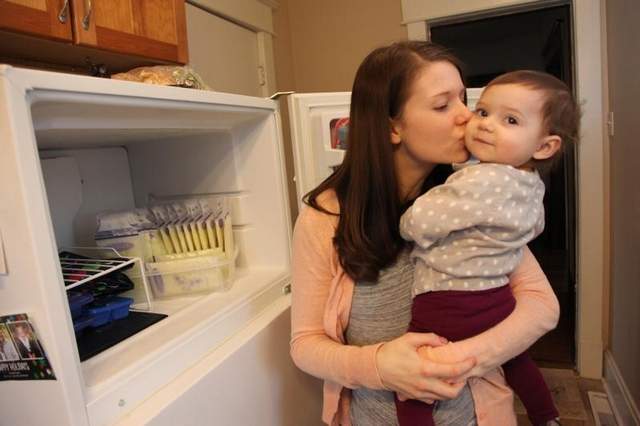 One thing I promised myself I’d do with this blog is to share any great ideas I came across with other moms or moms-to-be. Well, I found one, and I’m repeatedly kicking myself for not figuring this out sooner. Hopefully by sharing it with others, you’ll implement this plan from Day One and make your life a little easier!

This seems like common sense now, and maybe some of you super smart chicks figured this out on your own. I didn’t.

In fact, I only figured it out when I saw the above picture in the paper recently.

It was a story about selling your extra milk online, but what caught my eye wasn’t the story’s content. It was this woman’s stored milk. Look at that domino-style method she’s got going there! It looks awesome! And quite a contrast to what my freezer looks like: 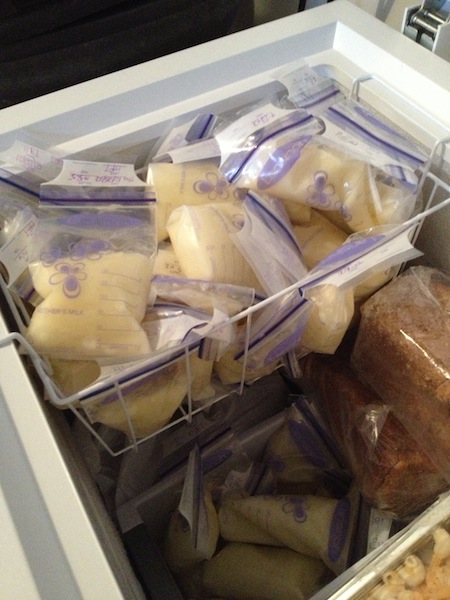 It’s not rocket science, but basically, you let the milk freeze in the bag lying FLAT. Then it’s easy to stack, store, and keep in order (which is important since you need to use the oldest milk first).

There’s a storage container sold on Amazon that uses a spring-loaded paddle to flatten the bags inside the freezer, but it doesn’t hold much. Plus it’s about $17 for just one (look at my freezer; I’d go broke buying containers for all that milk!). But the girl in the top picture appears to be using the plain ol’ clear plastic bins you get at Target for a few bucks each. Smart!

Just this week, I asked my husband to grab a bag of milk from the freezer to send to daycare the next day – “Grab a September bag!” I told him just as he stepped out the door. I heard lots of banging and the sound of frozen milk bags being tossed around. He came back in a few minutes later, grumbling about what a mess the freezer was. He couldn’t find the September bags, and the January and December were scattered all over the freezer willy-nilly. I spent about half an hour yesterday reorganizing it, but it’s still near-impossible to organize it when every bag is shaped differently.

From here on out, I’ll leave a spot on the freezer shelf open, and lie the bags of fresh milk there until they freeze. Then I’ll line up the bags in a container, put the new ones at the back, and ta-da! Booby milk organization!

I just wish I’d figured this out five months ago. 🙂

Do any of you breastfeeding/milk-storing moms have any other great ideas to share?