After our fresh cycle failed in September, I had to wait through two periods before the next step—a Frozen Embryo Transfer, or FET—would take place. And after that emotional dagger in the gut, I was more than happy to take an Infertility Vacation.

I settled in to wait 28 to 32 days for the next cycle to arrive (that’s code for “getting your period”), and as I explained in this blog entry, I hit 37 days without anything happening. I called the docs to get a prescription that I thought would get things moving quickly.

Not so much.  The way your cycle works is this: the lining of your uterus only knows it’s supposed to shed after sensing a big drop in progesterone. If you never ovulate, the progesterone never gets high enough to drop very far. So to incite a period, they have to first build up your progesterone levels with medication, then cut off the supply so it plummets. Bingo, Aunt Flow. Unpleasant mission accomplished!

I took my meds as directed, and I was at 51 days when the un-fun visitor finally arrived.

A total lack of enthusiasm

Docs were called and we scheduled the frozen transfer for early December. (My previously scheduled June baby [which was going to be an awesome summer maternity leave] is now a late August baby. Nine months pregnant in August! Awesome!! I am overjoyed at the thought of super-pregnant me in 100-degree heat.)

The day Aunt Flow came was kind of a momentous day, but not because I was overjoyed and rarin’ to go. I was actually thinking of it, honestly, as the beginning of the end.  Which got me feeling guilty once again. 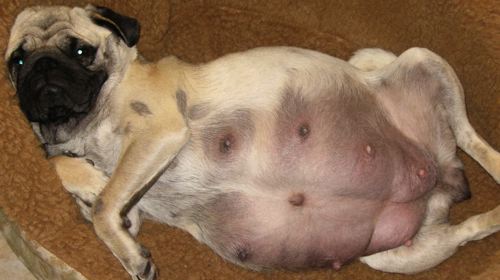 Apparently there doesn’t exist a picture of a pregnant human female who looks terrified. Those bitches are all smiling for the camera. LIARS. Instead, I found a really pregnant and scared pug. Poor thing.

I’m jumping through hoops to get pregnant, so shouldn’t I be ecstatic about this baby-to-be? Shouldn’t I be so psyched and ready for my life as I know it to go away? All I could think was, “Oh dammit, I better play all the volleyball I can while I’m still able…” and “I’m really going to miss my Tuesday night women’s league if this works.”

And then, “Oh crap. I’m playing in a reverse coed tournament a week after my transfer, I wonder if it’s still okay to play? This baby is already ruining my plans.”  (Hmm… all my objections are volleyball-related… maybe I have a volleyball problem?)

Is this NORMAL?  Am I making a huge mistake?

Call me Jillian Michaels—no really, do, because then I can pretend I look like her. 🙂 She’s terrified of getting pregnant and screwing up her carefully crafted physique, and I feel the same way (except it’s my carefully crafted LIFE I’m worried about losing).

But is anyone ever ready?  Is this why pregnancies take the better part of a year, so you can get used to the idea?

I’m serious, Moms. Tell me what you think.