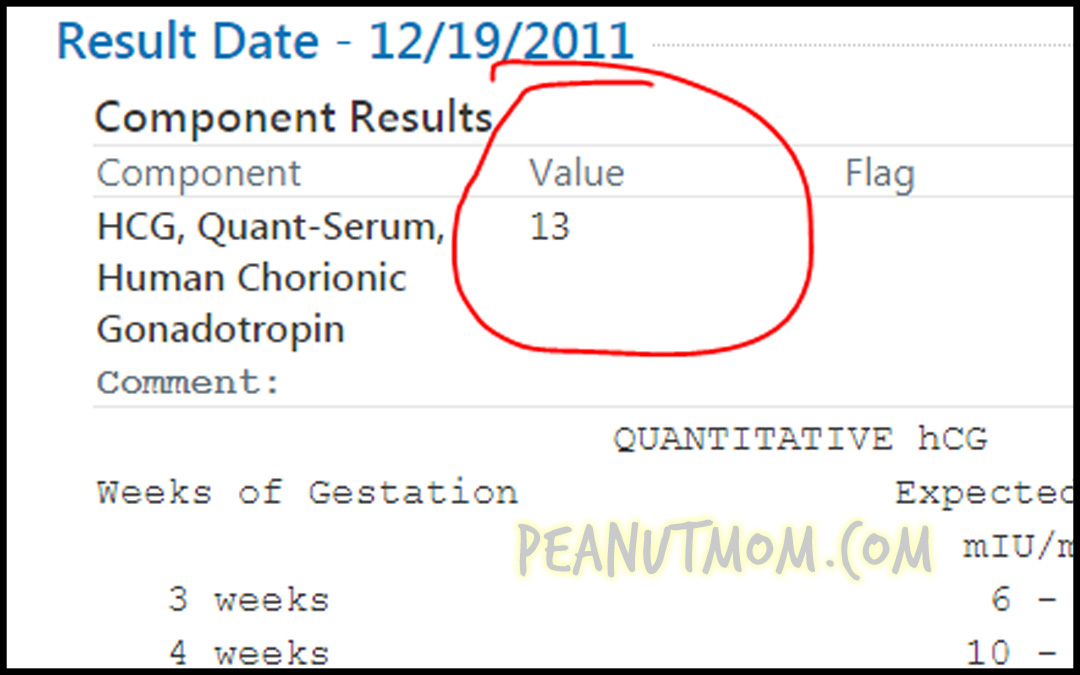 I’ve been holding out on updating my blog, but I have a good reason. It’s because I don’t have good news to share. But neither do I have bad news to share. I know, right? What the hell am I talking about?

Let me explain. I had my pregnancy test on Monday (December 19).

In preparation, I took the day off work (last time the sight was not pretty when I got the call at work, and this time my husband was actually home, so I didn’t need the lovely ladies at work to be my support squad in his absence). We went in for the blood draw, and came home. I changed back into pajamas and went back to sleep.

It wasn’t hard to do, even though I’d been awake only 90 minutes. I’d been up til nearly 3am the night before, sick with worry and nerves.

When the phone rang with the results, it wasn’t what I wanted to hear…. in a way.  It was positive, but barely so. They wanted me back in two days for another test.  I was too scared to ask the nurse what the number was.

A few hours later, we were at The Gap when an email alert came through letting me know my test results were posted on MyChart (the clinic I use has this nifty online information system).  The range for 4 weeks pregnant is from 10 to 750. Big range, right? Higher is better of course.

Technically positive, but far from encouraging.  Not a “Big Fat Positive,” but not a BFN, either. I like to think of it as a “Little Tiny Positive”. My own infertility acronym: LTP!

I went back on Wednesday for another blood test (the infertility lingo for this test is “a beta”). Beta #2 would either go down, signaling a miscarriage in progress, or it would go up dramatically, signifying that the pregnancy was on the right track. Those were the only two options, right?

Are you effing kidding me? I am — still — just a little bit pregnant.

It was a rise, technically. But a crappy one. It’s like getting your kid’s report card and his grade went from an F to a D-minus.  Technically it’s improvement, but your kid’s still flunking English and will probably end up gutting fish for a living.

The nurse on the phone wasn’t negative, but neither was she overly positive. She explained that a rising beta is a good thing, but the numbers were still alarmingly low. But still, she said, anything could happen. She scheduled me for an ultrasound the following week, and before she let me hang up she listed the symptoms of miscarriage, so I would recognize them if it happened. Bleeding, cramping, bloating, blahblahblah. She told me to keep taking my medication and most importantly, continue the “ass shots” every day.  Just assume you’re pregnant until you learn otherwise, she advised.

Grrrrrrrrrrrrreat. Sure, I’ll just continue the shots. They don’t turn my butt black and blue at all. *rolls eyes*

Then I realized: the ultrasound they just scheduled is EIGHT DAYS AWAY.  What am I supposed to do until then?

I learned 24 hours later what I couldn’t do: take frickin’ cold medicine. Overnight I had developed the worst case of Snot Factory I’ve had in years. I can’t stop sneezing and blowing my nose, and in a cruel twist of fate, I now look a lot like Rudolph the Red-Nosed Reindeer. But no drugs for me! Not even an ounce of pseudoephedrine to clear up the snot factory. Fluids and a humidifier, that’s what I get.

Luckily for my sanity, which is tenuous at best, thanks to advice of a friend who’s done the IVF dance, I asked for a third beta. Tomorrow afternoon I’ll know if I am not pregnant at all, pregnant a lot (Come on, Peanut! You can do it!), or still just a little bit pregnant. Fuuuuuuudge. 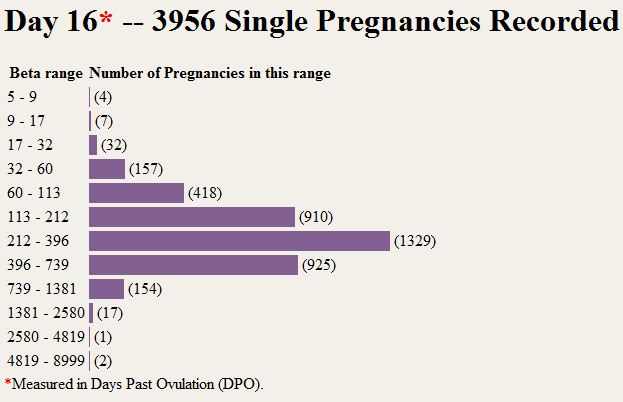 The beta chart for 16 days past ovulation. I’m kicking the crap outta the bell curve by being up at the top with a beta of 21. But not the VERY top! Still, there’s some tiny bit of hope here. And I’m clinging to it.

Like a total infertility psycho, I’ve been checking Betabase, a website where women can log their beta results. Sure enough, there are 32 women with a beta between 17 and 32 whose pregnancies went on to at least have a detectable heartbeat. Out of….3,956.  So I’m trying to stay positive.  It’s really unlikely, sure. But stranger things have happened.

Today, when my snot factory was in full force, I emailed the doctor’s office to see if I could take anything. The response I got back was completely shocking:

You sound like you’re miserable, so go ahead and take a decongestant. Besides, your hormone levels are really low so it’s unlikely your pregnancy will continue. Let us know if you have any other questions.

I stared at the computer screen, perplexed. The negativity was new. Every other nurse I’d talked to, the ones who’d called with beta results on Monday and again Wednesday, were never this… well… cruel. I couldn’t believe this woman would so carelessly deliver news like that, and via email no less. My coworkers were equally outraged.

I wrote back asking if she knew something I didn’t, because the nurses I’d talked to had told me to stay positive, and that while it wasn’t a sure thing by FAR, it could still be okay. She wrote back with more of her Nancy Negativity business:

It is correct that it could be fine but it is more likely that it will not be. Each case is individual though so we can still hope for a good outcome but should be prepared also that it might not be so good. Sorry to give you this news.

I decided to deliver my own set of “news.”

You know, given that I’ve been doing this dance for almost two years, I am fully prepared for — and accustomed to — negative outcomes. At the least, I would like it if my health provider could be a positive influence in this whole process, and be encouraging to me when things are uncertain.

I’m not dense enough to think that 21 beta at 12 days after transfer is a good thing. I know it’s not. But I would like to try and see the glass as half full. It makes life easier than seeing only the negatives.

She wrote back quickly, seeming to have realized she’d stepped in it.

That is a good attitude to have. Sorry I was being negative.

Boo-yah, I thought. Take that, beeyotch. You pissed all over my Thursday, so I hope you go home tonight and feel a little guilt for dashing the hopes of someone who’s stabbing herself in the ass with a giant needle every night, clinging to the very slim chance she might be able to stay pregnant. I get that your job is all about numbers, but lets not forget there’s a person on the other end of those test results. An infertile person to boot, which means she’s more psychotic than a normal chick. Tread carefully, lady.

That’s all I have for now. If you don’t hear from me, please don’t ask how things are going. This is a very shaky stage in any pregnancy, and mine more so than most. Peanut (this is our embryo’s name, for now) must be her father’s daughter, because she’s already not following the rules.