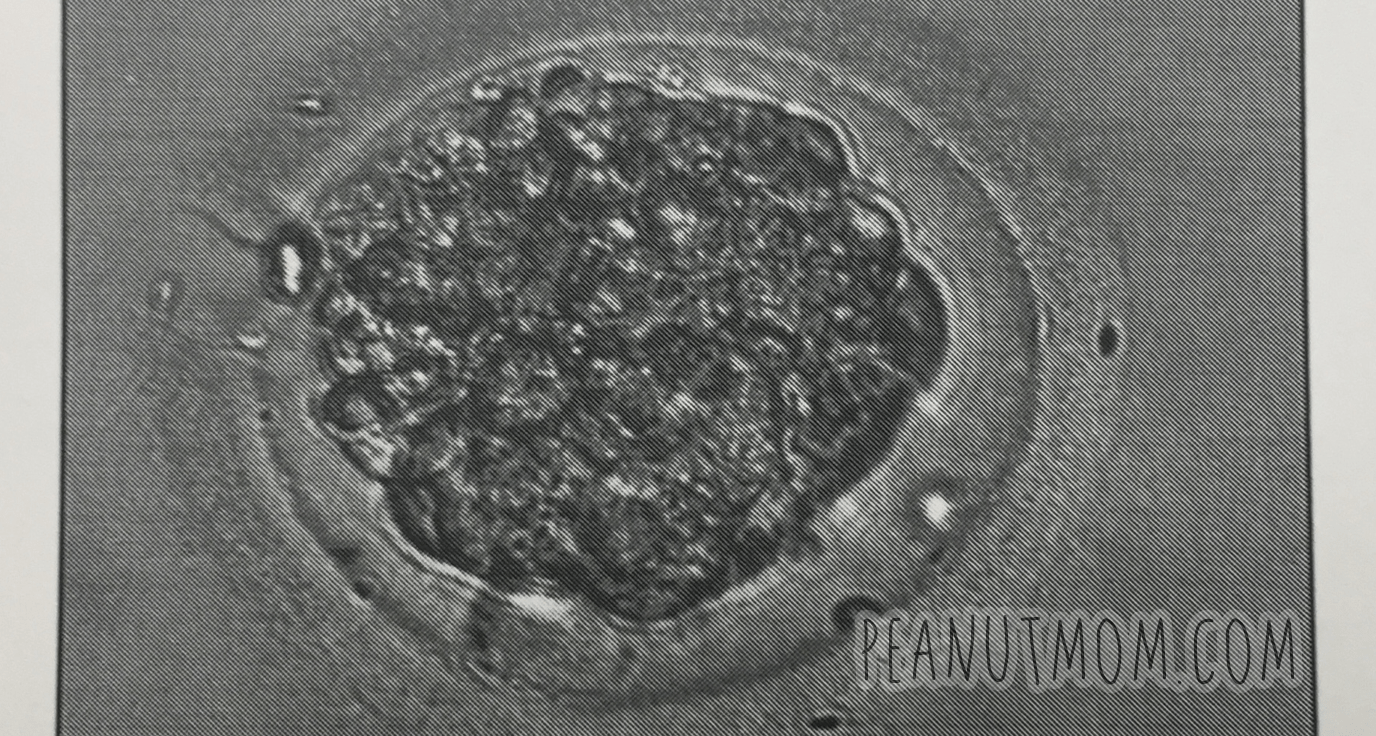 Last fall, I shared the story of our embryo recipients, L&J, miscarrying at 8 weeks. The cause was later discovered as Trisomy 18, a genetic defect that’s the most common cause of first-trimester miscarriage. It was only the first of three embryos we donated, so after L took some time to grieve, she was ready and excited to try another frozen transfer.

In a stroke of luck, Embryo #2 survived the thaw and was transferred successfully. L&J left that day full of optimism.

I was hopeful too, and this time, emotionally prepared for a positive test and the oogyness that comes with it. And when she got a positive test at home, I was happy for her. (There was only a little sliver of oogy.) But the second pink line on the test didn’t behave as expected.

In a strengthening pregnancy, the line should darken with each passing day. L’s didn’t. It stayed the same and then began to lighten. Not a good sign. At her blood draw, L’s HCG level was very, very low. So low that it would have been a statistical miracle for her to remain pregnant.

We kept the faith, though. I knew my embryos had a tendency to implant late and throw super low betas (ahem, Peanut!) at the first draw. I anxiously waited for the results of the second blood test.

But L already seemed to know what had happened. She felt pregnant earlier in the week—sore boobs, feeling odd–and it had disappeared. The second blood draw showed an HCG level that was near zero.

When they happen that early, it’s called a chemical pregnancy instead of a miscarriage. I’ve never understood that term. The embryo implanted, and then detached/stopped developing for whatever reason. To me, it’s a miscarriage.

Two down, one to go.

In early June, L&J were back for their third and final attempt. We had hosted them at our house the night before all three transfers, something I enjoyed and looked forward to like crazy. It was like having a sleepover with a good friend, one who’s not afraid to roll up her sleeves and help you bathe your kids or read them bedtime stories. She is a lovely houseguest, as is her charming and funny husband.

We were all nervous. We’d gotten so lucky with the first two, surviving the thaw. Our luck could run out this time, and a failed thaw was likely. In another stroke of luck, Embryo #3 survived the thaw beautifully. The pair drove back to Minnesota full of hope, but with, lets face it, a healthy dose of caution and fear.

The blood test was scheduled for 10 days after transfer, but L started doing home tests 5 days before the blood draw. The first HPT was negative, but the second showed a faint positive. And L was having all the symptoms of pregnancy. Woo-hoo!

But then the wheels fell off. The next day, her second line didn’t darken. By that night, her pregnancy symptoms had disappeared. Over the next two days, L took several tests, many of which showed no second line at all.

She knew the results of the blood test even before the clinic called.

I wasn’t sure if I was supposed to be proud, but instead I was profoundly sad. And mad.

I am mad at the universe.

How much bad news should one person have to endure, seriously? Three years of trying. A successful embryo match. A successful first transfer, only to have the rug pulled out by a miscarriage. Two more transfers, where positive pregnancy tests were dangled tantalizingly in front of them, and then snatched away days later. Come ON, universe. WTF.

I feel other stuff, too; emotions I’m not proud of. L knows most of this. We’re extremely honest with each other, which is part of what drew me to her in the first place. We’re both all about openness.

There, I said it. I am relieved that I won’t have to endure decades of watching a child who looks like my little Peanut or Squeak grow up from afar. I am glad that I can avoid the unsettled feelings, the grief, the struggle, and all the difficulty that comes along with donating an embryo so someone else can start a family using your genetic material. I had only gotten a small taste of it during L’s first pregnancy, before the miscarriage, but it wasn’t fun. And I am relieved that I don’t have to go through that again, nor a birth, and all that comes after.

I donated my embryos, but can I really call myself an “embryo donor” if no child resulted from my donation? Do I have anything to offer people who are thinking about donating, since I never closed the deal by experiencing birth of my genetic offspring? I worry that I no longer belong to the embryo donation community I joined back in 2014.

I emotionally prepared myself for someone else birthing and raising a child that came from our embryos. I donated with the goal of helping another couple have a child. And I failed to achieve that goal. At least, it sure feels like a failure.

I am second-guessing L, and I hate it.

I’m really, really ashamed of this, but I’m putting it out there. She made some changes in the weeks before the first embryo transfer. She did everything she could to set herself up for success: acupuncture, yoga, diet, exercise, mindfulness, meditation, and a slew of other things that made her body feel good. (I may have a few things wrong on that list, but you get the gist.) After the miscarriage rocked her world, she didn’t prepare the same way for the next two transfers. I wonder if it would’ve come out differently if she had.

Did the difference in preparation have something to do with it not working? Probably not. Scientifically, there’s zero proof to back up that assertion. But more importantly, it’s not fair to L for me to even think these bad things. I’m second-guessing her choices, which is judgmental and just all-around shitty of me. Hi, I’m Lydia, and I’m an asshole.

Before writing about it here, I talked to L and fessed up to this awfulness. I hope she isn’t too mad at me.

Above all, I’m ashamed.

I let her down. I couldn’t give her a baby, and she spent $20,000 to transfer my three embryos. That’s more than what an iVF cycle would have cost with their own eggs and sperm. Neither of us had any idea it would be so expensive. But once we started down the path, even upon learning about the cost, L didn’t back out. I feel like she put so much into this, emotionally, financially, and physically… only to leave empty-handed. My embryos failed her. I failed her.

I told all of this to my therapist. She was clearly annoyed.

“You need to reframe how you’re thinking about this,” she said sternly.

“You say your goal was to give someone else a child, but you’re assuming you have control over that. You don’t. Your goal was to donate your embryos and give someone a chance at having a child. And you accomplished your goal. The rest was out of your control. So quit pretending you could’ve done anything about it,” she chided.

The head doctor at my iVF clinic (also L’s doctor), called her after the third transfer failed. He felt strongly that it was an embryo quality issue, and not just with transfer #3, but with all of them. We know that’s true for the first one. And it’s entirely possible for the next two as well. I am not a huge fan of that conclusion, because it emphasizes my role in the failure. I sold her not just one lemon, but three.

The alternative, though, is that L blames herself, and her body. That’s even worse. She doesn’t need any more reasons to blame herself. I’m sure she’s beating herself up plenty without anyone else’s help.

I worry now that my friendship with L, cultivated over nearly two years, will slowly disappear. Do we have anything in common aside from embryos and infertility? I sure hope we connected on more than just frozen baby starter kits. Time will tell, I guess. I haven’t been texting her as much, probably more because of me than her. Every time we talk, I am reminded that I my embryos failed her, and by association, I did, too.

I know it’s not logical, but I feel it anyway.

Thankfully, L told me she wants to stay friends, too. Not in the superficial, “Let’s grab lunch sometime!” way, where you never really go to lunch, and it’s just something you say to be nice. She genuinely wants us to stay close. I would love that.

Because when this works for her, no matter how it ends up working–domestic adoption, a donated embryo, immaculate conception–I want to be there.

It’s going to be one hell of a party.