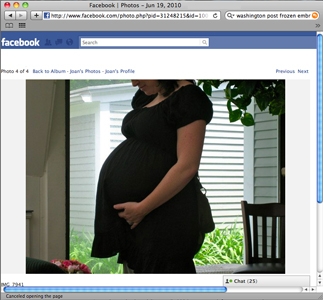 Anyone who’s trying to get pregnant uses Facebook at their peril. Inevitably, they will have to see the “Big Announcement” status updates, all of which are required to end in at least one exclamation point:

“We’re looking forward to a new addition in September!”

“We’re so excited to be adding two ‘feet’ to our home this fall!!”

“We’re going into the baking business, starting with our first bun in the oven!!!!”

Worst of all, you will most certainly be subjected to the Facebook equivalent of waterboarding:  NURSERY PHOTOS. 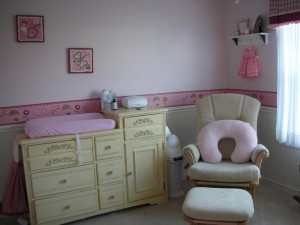 One example of a not-brag-worthy nursery. Sorry, lady who did this. I am not impressed.

Now, nursery photos are OK under one condition: you’ve created something awesome and want to brag. For example, if you managed to decipher IKEA’s assembly instructions and put the crib together singlehandedly, with no leftover parts, you’re welcome to post a snapshot of your accomplishment. Sweet!

Otherwise, I find it difficult to conjure up happiness that you bought a crib and stuck it in a corner next to a matching dresser and put a wall hanging above them both. If this is a major accomplishment for you, great, but I am guessing  you’re just trying to keep up with the Joneses to prove that you, too, can decorate a nursery. I’m convinced… now zip it.

But back to the status updates. I can’t expect chicks with Pregnancy Brain to think about anyone other than themselves when they break the big news. But it would be nice if they could, especially if they know for a FACT that someone on their list of friends is struggling with infertility.

I think of it this way — why would you brag about something that doesn’t come easily to everyone, and is usually out of their control?  You wouldn’t post these updates: 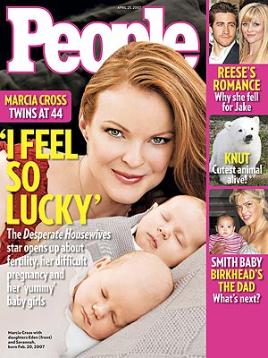 “I feel so lucky,” my ass. Lucky to have good doctors, more likely. She actually thinks we believe those came from her eggs, but we know the truth.

I appreciate it when the Announcement Statuses acknowledge that getting pregnant is sometimes hard. “It took a year, but we are finally expecting!” or maybe “After approximately 37,000 hormone injections, we’re knocked up and couldn’t be happier!” At least the baby-free folks like me will know we’re not abnormal for having to put some effort into it.

Don’t be a lame Hollywood celebrity: “I’m almost 50 and magically pregnant with my second set of twins!”  You’re not fooling anybody, Little Miss Fertility Clinic. Just friggin’ admit those kids look nothing like you because you used donor eggs. Marcia Cross, I’m talking to you.

Everyone looks at the world through their own lens, and right now, my lens is The Can’t-Get-Pregnant one. So I understand I will probably violate some of these rules myself when I am in a different place in this journey.

But please god, if I post an entire album of lame nursery photos, hunt me down and smack me. If that doesn’t work, you could always try waterboarding. 🙂

(If you’re trying to think of a way to break the news, here are some lame suggestions.)