The many flavors of Lucille Bluth 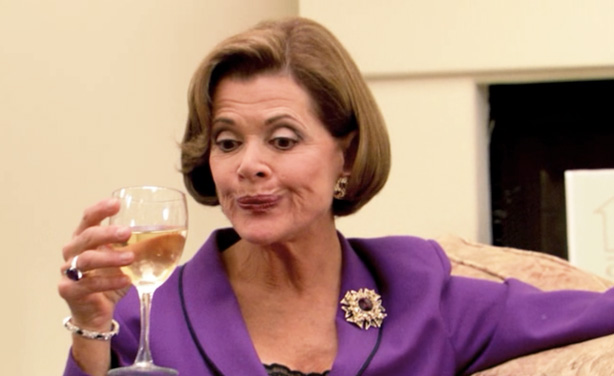 On a daily basis, I would estimate I feel about sixteen different types of guilt.

For example, on a typical Thursday morning, it goes like this:

Alarm goes off. I have to get ready for a day at the office. I should be at home with my kids, shouldn’t I? (Working mom guilt.)

During breakfast, my daughter demands Elmo. So I can tend to Squeak, I turn on an episode of Sesame Street. Are my kids getting too much TV? (Television guilt.)

I drop the kiddos off at daycare, getting more than a little sad when I give my final kisses and go. I’m leaving my children in the care of near-strangers. How could I leave others to ‘raise them’? (Daycare guilt.)

I call my grandmother on the way to work. She asks me when I am coming to visit. She lives over 2 hours’ drive away, and most trips involve carting both kids and a dog to her house by myself. I can’t bear the thought of such an ordeal right now. (Granddaughter guilt.)

At work, I do my best to stay fully present and engaged. By 2:45pm I’m exhausted and checked out, and I just want someone to give me a brainless task that doesn’t involve strategic thinking. Shouldn’t I be more than 80% present at work? (Employee guilt.)

After work, I pick up the kids and shuttle them home. Peanut climbs into her high chair and demands “pee-pees” for dinner. I feed her mini pancakes, a Greek yogurt, and applesauce, three things I know she will eat. I don’t fight her at mealtime. But shouldn’t I be forcing her to eat green beans and whatever I’m eating for dinner? (What-I-feed-my-kid guilt.)

After the baby is nursed and Peanut is fed, I sit on the couch and watch Peanut play with her toys while Squeak bats at the baubles dangling from his exercise mat. I should have planned something more… sophisticated. A sensory bin for Peanut? Finger painting? At the least I should be down on the floor playing with her, right? And I should be doing Tummy Time with Squeak. (Activity guilt, playing with my kids guilt)

Sometime around then, one of my Facebook friends posts about their “super awesome workout!”. I cancelled my gym membership a year ago after using it five times in 26 months. Shouldn’t I be more concerned with my physical health? (Workout guilt.)

When I finally get the kids in bed, I clean up a bit (dirty house guilt), but then I collapse onto the couch and watch two DVR’d episodes of Jeopardy. I should really be sleeping. Squeak is going to be up at least twice to nurse overnight. But I just need to not think for a while. (Sleep guilt.)

There are more types of guilt that often plague me. Wife guilt (for not doing all of the wifely things I ‘should’ as often as I ‘should’, ahem). Girlfriend guilt (for not spending enough time with my friends, and for letting way too much time elapse between phone calls… months, not days, in some cases). Daughter guilt, for not calling my parents as often as I used to. Sibling guilt, for not checking in with my sisters. Doggy guilt, for only walking him twice a week when we used to walk him every day.

I feel guilty for everything I do, either because I shouldn’t be doing it, or I should be doing it better than I am.

I feel guilty for everything I don’t do that I should be doing. I just can’t escape the guilt.

I was so overwhelmed by it that I found myself sitting tearfully on my therapist’s couch last week, asking her how to get some relief from it.

She had no magic bullets for me. “You can’t avoid guilt. But you can acknowledge that it’s there. Expect that you’re going to feel it, but try to minimize its impact,” she advised.

She thought for a moment: “Make it into a bit of a joke. Give it a name. Something funny. And then when it shows up in your mind, you can laugh about it. ‘Oh, hell, there’s Bob again. Screw you, Bob.'”

I have named my guilt Lucille Bluth. Because she’s awful, like feeling guilty. And she’s hilarious, which is what I want to feel when I think about guilt. I need a reason to laugh. 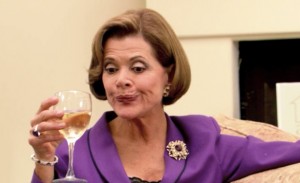 Lucille Bluth is the hysterically funny mother from Arrested Development. Do yourself a favor and watch the entire series from the beginning. It’s awesome.

Since giving my guilt a name, I’ve felt better. I’ve accepted that I can’t make it go away, so I’m just going to have to do what I can to minimize it…without driving myself insane. I’m not going to make it down to Grandma’s house this Christmas. I’ll find other ways to be a good granddaughter. I’ll send more pictures, and call more often.

I need to give myself a break (my awesome friend Shannon tells me this often). My kids don’t have activities planned every night, period. But last Saturday, I set up finger painting for Peanut and she had a ball. Today, even though I was home from work with a sick Squeak, I did some tummy time with him. Good enough.

I can’t do it all. It’s about time I come to terms with that. Besides, no matter how much I screw it up, I can’t possibly do worse than Lucille Bluth.